As many of you know, I have an article posted on Signs of End Times, where I discuss the various signs of the end times that Jesus described in the book of Matthew, Luke and Mark – wars and rumors of wars, pestilences,famines, earthquakes in various place.  See “Are We in the End Times” for more on end times events. 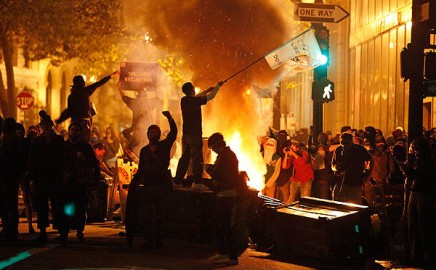 Prophecy in the Bible: What Jesus Said About Lawlessness and End Times

One of the signs of the end times I speak about in this article is that “lawlessness” in society will  become pervasive. Hear the words of Jesus as he mentions this fact in His message about end times events:

Matthew 24:12: “And because lawlessness will abound,
the love of many will grow cold”

Here Jesus is stating that “lawlessness”, a complete disregard for law, “will abound”. In other words, it will be common, pervasive, on the news, in the media.  The rule of “law”, upon which great societies are founded and prosper, will be cast aside in the name of selfishness and greed

Let’s take a moment to look at where the concept of “rule by law” came from, where our nation has been, and where we are now in 2020

Keep in mind that God Himself gave His people, and thus humanity, the “Ten Commandments” as a basic set of laws with which to rule themselves, in order that they survive and prosper.  These “laws” are more relevant today

than ever, and although the Son has set up free by His grace, that does NOT nullify the importance of the Law. In fact, believers in Jesus (Yeshua) should more than ever be the ones to fulfill the Law, by His Holy Spirit that He has placed in everyone who believes and trusts their life with Him.

England became a great country by establish their laws upon the Ten Commandments, and the Bible.  And America followed by establishing its Constitution, state and local laws after the English model, and ultimately the Bible.  That is precisely our coinage has listed on its face “In God we Trust” – because it has been God the Creator that has “shined His grace ” on America.  America the beautiful.

America became precisely because our nation was founded on God’s word, and these same Ten Commandments.  The Constitution, the highest “law” of the land, guarantees freedoms such as free speech, the right to peaceably assemble, and the right to bear arms in the event a citizen needs to protect themselves. its because of respect for our laws that America has become great among the nations of the world, and a magnet for people everywhere to come and enjoy these freedoms and liberty.

How Did We Get into this Present State of Lawlessness?

As we look around us during the first half of 202, we are starting to see lawlessness “abound”  How did this happen?  A number of log term factors have contributed:

What is Triggering the Lawlessness Now Abounding

The set-up for this lawless and chaos started in December, 2019, and has progressed through early 2020.  The key events that transpired to “set the stage” for this lawlessness:

End Times Lawlessness in Cities Around the World!

In May-June of 2020, it is clear that “lawless is abounding” across America, and indeed around the world.:

Seattle, Washington – Part of the city was taken over by lawbreakers and declared autonomous and free from police and the local government, only to result in the murder of 4 people within the zone in less than one month.

Portland, Oregon – the city has now now fallen into violent protests, and a 300% increase in shootings compared to 2019

“As riots continue, it is obvious to everyone that this is no longer about George Floyd, social justice, or police reform,” Turner said in his letter. “This is about a group of individuals intent on causing injury, chaos, and destruction by rioting, looting, starting fires, throwing rocks, bottles, mortars, urine, and feces at peaceful protesters, as well as the police.”

Minneapolis, Minnesota – Out of state agitators turn Minneapolis into a burning inferno.

Australia – Perth, Sydney – Thousands across the country take part in anti-racial protests sparked by BLM in the U.S.

Key Aspects to Notice About the End Time Lawlessness

The Mass Media is Fueling the Fires, with Mayors and Governors Standing by Idle

This is All Leading to “The Lawless One” Who is Coming

The the New Testament, the writer Paul – moved by the Holy Spirit – describes in 2 The 7-9 a “mystery of lawlessness” that is already at work in the world:

This “mystery” of lawlessness is the force of evil, working through financiers, governors, majors, and other politicians. There is a demonic force at work behind all of this – – the hijacking of the Covid-19 virus to create a pandemic of fear, the destruction of economies around the world to remove security and life support from millions, and now the violent protests designed to flame the fires of hatred among people.

This is the work of the evil one, pure and simple.  As Jesus said, he is a liar and the father of lies.  He is the destroyer, and wants to rule the world through the power of an “anti-Christ” – a one-world ruler.  He knows that his time is short, and that the Messiah Jesus is coming and will one day consume him with the “breathe of His mouth”. He will soon be revealed as a calm and confident individual, charismatic even, one who promises to restore order and bring peace to the nations.  This is the “great deception” that is spoken of in the Bible: see 2 Thessalonians 2:11, which predicts that God will, in an end-times judgment, send “a powerful delusion so that they will believe the lie.”

2 Thess 2:11: 11 “Therefore God sends them a strong delusion, so that they may believe what is false,
in order that all may be condemned who did not believe the truth but had pleasure in unrighteousness.”

This great deception is associated with the satanic work of the Antichrist and his “displays of power through signs and wonders that serve the lie” (verse 9).

The Lawless One WILL BE Revealed – Along with Great Tribulation

As Th 2:8 indicates above, once the restraining power of “He” (the Holy Spirit) is taken away, the “lawless one” – the anti-Christ will be revealed. He will come on the world stage as a charming, powerful leader, who will deceive the world by his intelligence, charm, and good looks.  People will be in a state of fear, panic, and looking for a leader to show them the way.  Since they have rejected the Lord, the masses will accept and follow this new one world leader.

Those who pledge their allegiance to the one world ruler will take “the mark of the beast” upon their hard or forehead, so that they will be able to buy & sell and participate in the one-world economic system.  There is already some evidence that this “mark” is being prepared and TESTED, so that without this “mark”, you will not be able to buy or sell.

Once these things are in place, the “anti-Christ” will have arrived, and all the nations will bow down to him. A final 7 years – the “Tribulation” period – of man’s history upon the earth will ensue. A time that Jesus spoke about, which will come upon the whole earth,

Matt 24:21: “For then there will be great tribulation, such as has not been since the beginning
of the world until this time, no, nor ever shall be.

Space prevents us from discussing the Tribulation period here, but suffice to say that this 7 year period is indeed the End Times that shall come upon the earth.  The period is spoken of in the book of Daniel, and also described in the gospels.  Its is also referred to in other books of the Tenach (Old Testament).  It is a time when Satan make his last play for power upon the end, and it ends with series of judgments cast down by God Himself upon the earth, in judgement of the wicked and evil inhabitants that have pledge allegiance to the anti-Christ.

The period is detailed in the book of Revelation in the Bible, ending with Jesus Himself descending from Heaven, ending the last battle, and slaying the anti-Christ and his followers.  Christ returns to take possession of the earth, even as the angels at the tomb had predicted, and as the bible had foretold.  Jesus Christ, the Lamb of God, returns as King over all the earth, the Lion of the tribe of Judah.

Jerusalem become his throne, and He begins a reign of 1,000 years upon the earth, with His saints as His loyal followers. More about this in Isaiah, the book of Revelation, and through the entire Bible.  Its is coming, and it is going to happen.  You can bet your life on it.

Jesus Advised of the End Times, and Said “Watch” and Be Ready

Its very clear from prophecy in the Bible what is coming.  The End Times, or “Day of the LORD”, are as sure as any other prophecy which has been documented and fulfilled in the bible.  Over 300 prophecies listed in the Torah & Tenach (the Old Testament) were fulfilled in the birth, life, death and resurrection of Jesus (Yeshua) the Messiah. 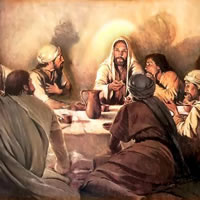 The prophecies in the Old Testament concerning Israel being dispersed through out the whole earth, and then after 2,000 years, returning back to their land to be established once again as a nation were fulfilled in 1948.  And so the fulfillment of prophecies concerning the End Times, including…

For more detail on the End Times, see the page https://evidencetobelieve.net/is-this-the-end-times/

We don’t know the day or the hour, but we can read the signs of the times.  And indeed, we could very well be entering into the “End of the Age”.

If this is the End Times, What Are We to Do to be Saved?

The message is clear from the Bible:  Repent, and believe in the Lord Jesus Christ to be saved. Good works won’t save you, since even our best works are as “filthy rags” to a Holy God.  Other gods won’t save, as there is only one true, all powerful, all mighty God who exists in a complex unity of Father, Son and Holy Spirit.  the Father, the

Alpha, the Creator; the Son who gave His life for human kind, the Redeemer and Image of the invisible God; and the Holy Spirit, the person that fills each believer who accepts Jesus, empowering them to live a godly life.

As a nation, we must turn back to the Lord and recognize Him as the ultimate authority above everything else.  We must bring God back into our schools, into our classrooms, and into our workplaces and government offices.  We must repent and cry out to the LORD to forgive us, and heal our land.

You were made for a purpose, and your daily walk with  Jesus will help you come to realize His purpose in your life and fulfill it.  If you don’t have a relationship with the Lord, you can!  Give Jesus a  chance!  Don’t put it off.  Allow Him to come into your life and make you “a new creation”!   You have nothing to loose everything to gain.  Here is a  link to Billy Graham’s web site that can show you how you can invite Jesus into  your life and be the creation He has always intended you to be …

Take Me to Steps to Peace With God ==>  http://www.billygraham.org/SH_StepsToPeace.asp

Got Questions.org – “What is the Great Deception in the Bible” – https://www.gotquestions.org/great-deception.html

MyNorthWest.com – Image of siego of Portland