It shocking that the death rate due to over-doing on drugs has been sky rocketing in the past few years, and documented in this report in MarketWatch:

“What killed more people in recent years — those struggling under urban overpasses or snug in their suburban beds — than guns did at the early-1990s peak in U.S. homicides? 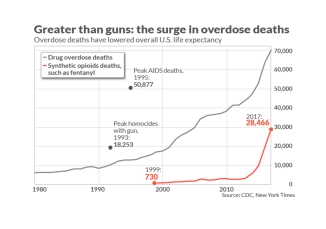 It’s not a hard question: opioids. They killed more than 70,000 Americans in 2017, a record. But the rate at which opioid deaths had added up, and their negative pull on the overall life expectancy in rich, advanced America is alarming, especially when charted.”

Suicide rates among you people are also dramatically up, according to the latest statistics.  In a report from USA Today, they ask “Is more funding required to deal with the sky-rocketing suicide rate?

“Suicide and drug overdose rates continued to rise in 2017, helping drive the number of U.S. deaths to the highest total in more than 100 years, the Centers for Disease Control and Prevention said in a series of reports on mortality released Thursday. One result: Life expectancy in 2017 fell to an average of 78.6 years for the total U.S. population, down from 78.7 years in 2016.

“Tragically, this troubling trend is largely driven by deaths from drug overdose and suicide,” CDC director Robert Redfield said in a statement. “These sobering statistics are a wake up call that we are losing too many Americans, too early and too often, to conditions that are preventable. Overall, more than 2.8 million Americans died in 2017, about 70,000 more than in 2016.

The reports noted that heart disease, cancer, unintentional injuries, chronic lower respiratory diseases and stroke remained the leading causes of U.S. deaths. However, since 2008, suicide has ranked 10 and has been growing at an alarming rate.”

What is Causing this Surge in Suicides and Drug Overdoses?

In my view, its not a lack of housing, food, education, or material wealth.  America is one of the wealthiest countries in the world, and I have been to a lot of them. Its a lost sense of purpose.  People are running to and fro, keeping themselves very busy amassing more “stuff” – larger homes, more and newer cars, a bigger wardrobe, the newest gadgets.  But material wealth cannot fill the void

inside the human heart.

And an endless pursuit of knowledge cannot fill that vacuum either.  For the bible say “of the pursuit of learning there is no end”  Is there a problem with learning?  No.  God created in each of us a desire to learn.  It is when we make learning in itself our supreme goal that this becomes a problem. For knowledge of worldly things  “puffs up”, and leads to pride.

Until finally emptiness, frustration, and depression.  Why?  Because these things can never satisfy the “God sized” hole in the heart of every man and woman. Only His Holy Spirit can do that.  Only the Creator that formed you can do that. We are each created for a relationship with our Father.  Originally we walked in the Garden with Him, and we talked with Him whenever we felt the need.  But then we rebelled, and decided to make for ourselves a god.  A god of things, possessions, and materialism. We killed, destroyed, and corrupted the beautiful earth that He had created for us.

But He never gave up. God wanted us back, and so He came to earth in the form of flesh at just the right time  – His name was Yeshua (Jesus) – to save us from destruction.  God is a God of Mercy and Love, but also Justice. He loves us, and does not want to see us punished. Yet he must punish sin. How to solve this problem?  Jesus was and is the Answer. The perfect God-man. “The Way, the Truth, and the Life”. Someone had to take the punishment for our terrible deeds, and that Someone was Jesus, who lived a sinless life, then gave Himself  as a Ransom for us. His life was of limitless value. He paid the price and took our punishment upon Himself.  All He asks is that we believe and trust our life with Him to be saved from destruction (John 3:16).

A Purpose for Living, a Hope for the Future, a Place in Heaven

Folks, there is a spiritual battle for eternal souls going on. The bible says we are living on a “fallen” planet, once that has been contaminated, and over-run by an invisible spiritual force.  The Good News is that God our Creator is greater, and His plan is on track and will be completed. There is an absolute Good – the Creator – who wants to see everyone of His creatures saved, and brought into an eternal relationship with Him.. But there is also an evil force working in the world to try to defeat God’s plan.  God our Father

wins in the end – make no mistake about it.  The enemy will be defeated, and God’s plan will prevail (see the last book in the bible).

What can you do?  If you don’t know the Lord, given Him a chance in your life.  Ask Him to come into your heart and reveal Himself, cleanse you of your sins, and give you the gift of eternal life.  This is the single most important thing in your life here on earth:  Click here to take action: https://peacewithgod.net/

If you know the Lord already, then pray each day that He guide you, fill you with His Holy Spirit, and lead you to the works He has for you to make the most of your earthly existence. Pray for and take care of your brothers and sisters in the Lord.  Share your faith with those that don’t know the Lord. Let Christ work in your life on a daily basis.  Pray continually.  Focus your minds on what is good, and turn away from evil.  Read your Bible, and seek His will for your life – for He would still have died for you 2,000 years ago if you were the only person on earth.

The Good News is that He has left His Spirit within each one of those who have committed their lives to Him, and He is going to return one day!  The Lord will retake the earth and set up his reign , make no mistake.